Written on your Heart 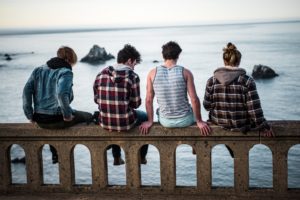 Jeremiah 31:33 (NIV)
“This is the covenant I will make with the people of Israel
after that time,” declares the LORD.
“I will put my law in their minds
and write it on their hearts.
I will be their God,
and they will be my people.

When I was a kid growing up in church I remember lots of discussions in our youth group that could all fit under the heading; “How Far is too Far?” We were all asking, “At what point have I crossed the line into sin?

Many of those questions applied to dating and the opposite sex as well as other moral issues. As I grew older and matured I began to realize that we were really concerned about how much we could get away with and still be okay. Like a young boy playing in a camp fire we wanted to know that we hadn’t yet gone so far as to be burned.

Now in my adulthood I have a couple of observations. First, it seems we were asking the wrong questions. Perhaps it would be more appropriate to ask, “How closely with God can I walk?” Or, “How far away from sins door can I stay?” We certainly weren’t asking those questions.

Secondly, I’ve learned that we already know the answers to many of the things we question. Like I often tell my children, “If you are asking the question you might already know the answer.” If you are God’s child then you have the Holy Spirit constantly guiding you in what’s right and wrong. So if there’s a moral issue that you are questioning today consider whether your real query has to do with its rightness or your willingness to do what’s right.

Romans 2:15(NIV) They show that the requirements of the law are written on their hearts, their consciences also bearing witness, and their thoughts sometimes accusing them and at other times even defending them.