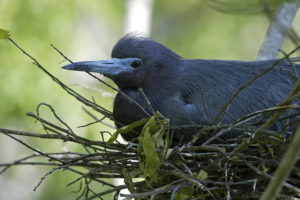 The other day I went out the back door and noticed immediately that a Mocking Bird was unusually close.  As I ventured further out in the back yard the bird was becoming an intrusion to the otherwise peaceful afternoon.  It seemed that wherever I went the bird was there squawking at me as if I had angered her.

I noticed as I passed by a particular bush that the bird became even more agitated, it was then I heard the sounds of baby birds coming from the deep interior of the bush.  I realized that it wasn’t the bird who was an intrusion to me but I was an intrusion to her and her babies that she was tending.

Over the next few days I watched the mother bird feed and attend to her young.  One afternoon there was a violent storm and I wondered how the young birds were taking the harsh weather.  After the storm had passed I ventured out to the bush and peeled back several layers to view the birds nestled quietly under the outstretched wings of their momma.  The mother bird hardly moved as she saw me peering in.  I imagined how secure those young ones must have felt under the wings of their guardian.

It’s that way for us too.  The safest place in any storm is right under the wings of God.  He watches over us and protects us. Like the loving attention of the mother bird for her young He cares for us and meets our needs.  Still the safety we experience is directly related to how closely we align ourselves to His presence.  In the greatest storms of life the deepest security we can know is found in the shadow of His wings.