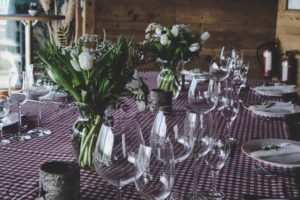 She is held as an example of the kind of humility and service that God loves. We’re never even given her name and she’s only known as the sinful woman; the assumption is that she has lived an immoral life. We have few details of her existence before or after her meeting with Jesus but we know her life changed because she met Him.

As the scene opens we see her at the feet of Jesus. She is weeping and her tears are falling on His feet and she’s wiping them with her hair. She has brought with her expensive perfume and is pouring it out on Jesus feet as an act of blessing and honor. She is broken and wounded.

There is no place set for her at Simon’s table; she is an intrusion. We have no idea what drew her to Jesus. Had she met him earlier that day? Did she know of His character and love?

Simon, the religious leader who was hosting the event, took offense to the presence of the woman and the spectacle she had created at his dinner. Jesus, perceiving his grumbling, turned to him and pointed out his hypocrisy and actually contrasted him with the woman who he had judged.

Jesus compliments her humble heart and acts of worship as the kind of service that pleases God. She is the uninvited guest and Jesus treated her as the guest of honor.

Jesus had only two things to say to the woman. First He said, “Your sins are forgiven.” He set her free! Gone were the chains that had defined her life. Then He said, “Your faith has saved you, go in peace.”

Perhaps, like this woman, you feel as though you don’t belong at Jesus’ table. Yet humble worshiping sinners are Jesus’ honored guests. He gives them new life and sends them with a reason to serve Him.