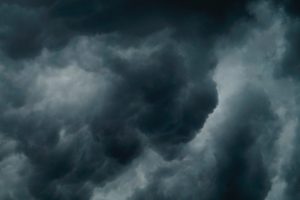 The other day I went out the back door and noticed that a Mocking Bird was unusually nearby. As I ventured further out in the backyard, the bird’s squawking became an intrusion to the otherwise peaceful afternoon. It seemed that wherever I went, the bird was noisily complaining to me, as if I had angered her.

Over the next few days I watched the mother bird feed and tend to her young. One afternoon, our area was hit with a violent storm, and I wondered how the baby birds had fared. After the storm had passed, I ventured out to the bush and peeled back several layers of thick brush. There were the babies, nestled quietly under the outstretched wings of their momma. The mother bird hardly moved as she saw me peering in. I imagined how secure those young ones must have felt under the wings of their guardian.

It’s that way for us, too. The safest place in any storm is right under the wings of God. He watches over us and protects us. Like the loving attention of the mother bird for her young, He cares for us and meets our needs.

Still, the safety we experience is directly related to how closely we align ourselves to His presence. In the greatest storms of life, the deepest security we can know is found in the shadow of His wings.