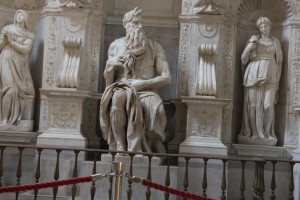 Looking this way and that and seeing no one, he killed the Egyptian and hid him in the sand. Exodus 2:12 (NIV)

Moses was used by God to bring the Israelites out of Egypt and to the Promised Land. However, like a lot of other great leaders in Scripture, Moses had a terrible personality flaw: his temper. And unfortunately, it got the best of him on more than one occasion.

For starters, there was the time he saw an Egyptian beating one of his fellow Israelites. How did this great man of God respond? He killed the Egyptian and hid his body in the sand (Exodus 2:12).

On another occasion, when the people were out of water, Moses was told to go and speak to the rock. In his anger, Moses struck the rock instead (Numbers 20:8). Because of this, Moses wasn’t allowed to enter the Promised Land. Interestingly, however, God still sent water out of the rock, even though Moses lost his temper and failed to follow God’s instructions.

And then there’s probably the most well-known of Moses’ temper tantrums: He broke the tablets with the Ten Commandments on them. (Exodus 32:19) Granted, the Israelites had already broken commandment Number One, and he hadn’t even given them to them yet…so we could perhaps allow some leeway for righteous indignation. Still, Moses had to go back up the mountain and get a second set of tablets.

So what can we learn from these fits of anger? Despite Moses’ failures, in each situation he returned to serve God, and he is listed in Hebrews Chapter 11 as a person of great faith. Like Moses, God can still use us, in spite of our human frailties.