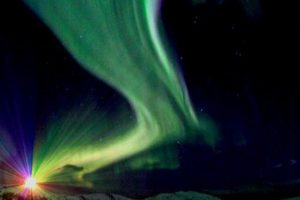 Romans 1:20 (NIV)
For since the creation of the world God’s invisible qualities—his eternal power and divine nature—have been clearly seen, being understood from what has been made, so that people are without excuse.

I remember once seeing an incredible display of the Northern Lights. At the time we had lived in northern Minnesota and seeing the Aurora Borealis was not an unusual thing. It was almost always there and even if they weren’t immediately visible on most nights you could locate them by positioning yourself for a better vantage point. On this night the display was the most amazing show I had seen yet.

We had been on a trip and had returned rather late at night. As we looked up it was as if the whole of the heavens were on fire. There seemed to be glowing waves coming from all directions. There were blues and purples and shades of pinks I had never experienced. They gently waved from side to side and disappeared into the atmosphere leaving a perfectly black circle directly above us. It seemed you could reach right up through that circle directly into heaven.

I remember thinking what a creative God our heavenly Father is to have set this display in motion. It’s a natural connection that most people make between the Creator and His creation. It’s the way we’re wired I suppose; we see a beautiful painting hanging on a wall and we immediately ask who painted it. We think of God’s creativity when we see a beautiful sunset or when we get a glimpse of the mountains we think of his power. And when we stand at the ocean’s edge we think of His unlimited character.

Perhaps this fall if you get a glimpse of His creation you’ll think of Him.