Second Rock from the Sun 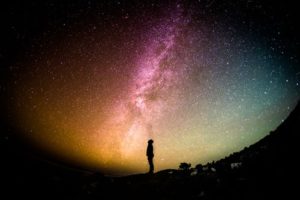 The heavens declare the glory of God; the skies proclaim the work of his hands. Psalm 19:1 (NIV)

The other evening, as I walked by the front window of our home, I caught a glimpse of a bright light in the early evening sky. I knew what I saw was more than a distant airplane or helicopter. It seemed odd to see such a bright light in the sky, as the sun had just moments earlier dropped beyond the horizon, leaving the sky a beautiful shade of pinkish-orange. This must be a planet or a star, I thought. My curiosity led me to an online search, revealing that what I was seeing was the planet Venus.

My teenage son happened by, and together we were mesmerized by the brightness and size of this one light in the sky. It seemed so close you could reach out and touch it, yet I knew it was millions of miles away. Thinking out loud, I said, “I bet it would take years to drive that far—if it could even be done.” My son responded, “We learned in school that it took the Mars Explorer over six months to arrive at its destination, and that’s with the help of rockets!”

Later on, as I was taking my evening walk, I struggled to find this same distant planet. It was now upstaged by millions of other stars. I couldn’t help but think about how immense our universe is…and yet, it was to this one small dot in the massive expanse to which the Savior came. It is this human race—our human race—for which the Savior came to live and die so that we could have a relationship with Him and live with Him for eternity.

See what great love the Father has lavished on us, that we should be called children of God! And that is what we are! 1 John 3:1 (NIV)