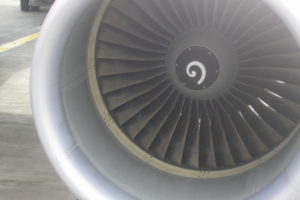 Who is it that overcomes the world? Only the one who believes that Jesus is the Son of God. 1 John 5:5 (NIV)

As I stared out the airplane window at the rain, I tried not to feel irritated that my trip was once again delayed. It had been a long overseas trip, and this was just one more delay in a series of delays. I considered reading the airline magazine, but I had read the same one on the trip over two weeks earlier. So I zoned out for a few minutes, and as my mind wandered, I happened to notice a yellow square painted on the ground just beyond the edge of the airplane wing. A stenciled message warned, “No Standing.” That made me curious. Why was standing prohibited in that particular area?

A few minutes later the pilot fired up the engines, and I got my answer. The yellow box marked an area that was in close proximity to the engines. I observed the falling raindrops get violently sucked into the powerful engine. Now I understood the warning on the yellow box.

Are you depending on Him today? Are you connected to the Overcomer?

“In this world you will have trouble. But take heart! I have overcome the world.” John 16:33 (NIV)