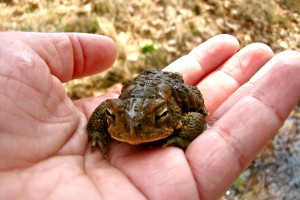 Are not two sparrows sold for a penny? Yet not one of them will fall to the ground outside your Father’s care. And even the very hairs of your head are all numbered. So don’t be afraid; you are worth more than many sparrows. Matthew 10:29-31 (NIV)

The other day I was standing in the garage as my wife got ready to run some errands. She got in her car, started the engine, and just as she was putting the car into reverse, something caught my attention. A small frog was directly under the car, and it was hopping toward me…and toward the tire on her car. I shooed the frog away and out of the garage just in the nick of time. I was happy my intervention spared his little life.

The next morning, as I was leaving for work, I noticed something disturbing. I saw that same frog but sadly, he was no longer hopping. In fact, he was flat as a pancake, in just about the same spot where I’d saved him the night before.

I assume he couldn’t resist the warmth of the garage floor and the tasty June bugs that make their home in our garage. Apparently he met his end when Juli had returned from her errands. It was dark by that time, and she wouldn’t have seen him.

Sometimes I feel like that frog on the fateful night of his passing. Nobody’s looking out for me; nobody’s concerned with my well-being. And I’m about to be squished. The other day I was having one of those days.

In frustration, I asked God, “Are you there, God? Are you looking out for me?” And then I was reminded that God is always looking out for His creation. It says so in the Bible. He knows all of the pains and worries of our lives. He sees all of His creatures and cares for them all, especially us.

But the eyes of the LORD are on those who fear him,
on those whose hope is in his unfailing love. Psalm 33:18 (NIV)