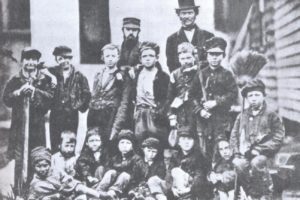 D.L. Moody lived in the later part of the 1800s and was well known for his influence as an evangelist. History books say he led more than a million people to Christ during his lifetime.

One of the most interesting facets of his life was his work with children. Moody was gifted at reaching out in love to gangs of young boys who had grown up on the streets and back alleys of Chicago. Occasionally, Moody would have to break up fights between boys before he could begin his classes. Among them were boys known as Red Eye, Smikes, Billy Bucktooth, and Butcher Kilroy. All these young men accepted Christ as Savior and became known as “Moody’s Gang.” As these ruffians matured under his tutelage, they became his biggest allies, organizing and providing crowd control for some 1,500 children who came to his Sunday school classes and evangelistic meetings.

It is said that Moody would travel the streets searching for children and call them to come to his Mission Bible Class. Often Moody would knock on doors or march right into a saloon or brothel looking for parents so he could secure permission for their child to attend his Bible classes. He would teach these youngsters of Jesus’ love and tell them of the offer of eternal life – if they would only turn to Jesus and repent of their sinful ways.
Thousands of them did, and the city of Chicago was forever impacted by the great evangelist’s work among children and adults. In fact, many of those would-be delinquents later become successful business men and Christian leaders.

Isn’t that just what Jesus does? He seeks and saves those who were otherwise lost and without hope. He redeems them by giving them new life.