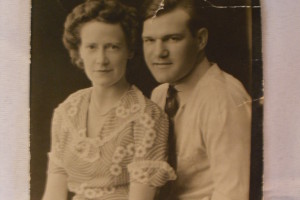 So Jacob served seven years to get Rachel, but they seemed like only a few days to him because of his love for her. Genesis 29:20 (NIV)

I used to work for a man who was a gunner in the Air Force during World War II. One time he told me a horrific story about watching a friend’s plane get shot down over the Pacific. I was so intrigued by his harrowing tales of dogfights and enemy warplanes. I can’t imagine what it must have been like for him to be in air combat and never know if his plane was about to be shot down.

What my friend really enjoyed talking about, though, was the love of his life. He met her just a few months before leaving for the war, and they wrote to each other every day for three years. During that time they weren’t able to see each other even one time! His devotion to her kept him going through the most difficult days of a bloody war.

Jacob, the main character in today’s verse, served Laban seven years in order to earn the right to marry Laban’s daughter Rachel, whom Jacob loved. But after his time of service to Laban, Jacob was tricked into marrying Leah, Rachel’s older sister! So Jacob was forced to work another seven years in order to marry Rachel. I love that the Bible tells us that Jacob’s seven years seemed like just a few days because of his great love for Rachel.

Enduring love like that is fairly rare. The Bible tell us:
Many waters cannot quench love; rivers cannot sweep it away. If one were to give all the wealth of one’s house for love, it would be utterly scorned. Song of Solomon 8:7 (NIV)

Think about your love relationships. Are any of them strong enough to produce that type of devotion? Where have you seen that type of love modeled for you? What would it take to live out that kind of love?