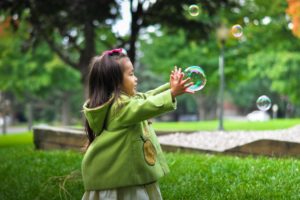 He predestined us for adoption to sonship through Jesus Christ, in accordance with his pleasure and will… Ephesians 1:5 (NIV)

My relationship with my daughter Anne started out differently than with my other kids. Anne first came to our home as a foster child, and that’s how I introduced her to people. “This is my foster daughter, Anne,” I would say.

Anne was not like our other children. Not only was there an age gap—she was quite a bit younger than our youngest—but there were also vast differences in the way she related and in the things that interested her. Our other children found her behavior humorously quirky and would comment about things that seemed unusual to them. It was clear that Anne, although loved, was different.

Later on, my wife and I had the joy of adopting her. I noticed that at first, I still clarified our relationship when introducing her. “This is Anne, our adopted daughter,” I told folks. I wondered if I would ever think of her the same as my biological children.

But over time, something changed. I didn’t consciously make a decision to stop identifying her as adopted, but one day I noticed that I had. She simply became Anne, my daughter. I suppose this is a natural progression for parents who adopt children. Time has a way of growing love and making differences less perceptible.

I got to thinking about the fact that God has adopted each of us to be His children. Only with God, His love and affection for us is instantaneous. He brought us into His family, and we immediately received all of the blessings of being His child. No disclaimers. No clarifications. Just His dearly beloved children!

See what great love the Father has lavished on us, that we should be called children of God! And that is what we are! 1 John 3:1 (NIV)