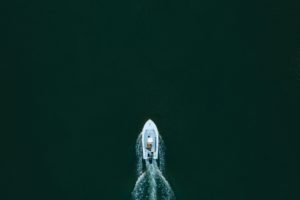 Then He arose and rebuked the wind, and said to the sea, “Peace, be still!” And the wind ceased and there was a great calm. Mark 4:39 (NKJV)

It was a perfect evening as my friend Ron and I launched the boat and headed out to deeper water to fish. The water was calm, and there was a refreshing breeze that kept us cool. At first we weren’t catching many fish, so we decided to head to the opposite side of the lake where I had previously discovered a secret “honey hole.”

I anchored the boat, and we dropped our hooks in the water. After a short while we began to catch fish—lots of fish, and all keepers! I knew it was a great spot, but I had never caught so many fish.

After a short while I noticed the sky seemed unusually dark. At first I shrugged it off, but a few moments later I looked over my shoulder and saw dark, ominous clouds rolling toward us. Now it all made sense: The reason for our good fortune was that fish often feed while the barometer is rising.

I knew we had to make haste and get my aluminum boat off that lake. At first we made a bee-line for the opposite shore where we had departed from. But as lightning started to crash all around us, we decided to go the longer but safer route around the shoreline. By the time we got back, we were soaked to the core—but we were safe from the storm.

It reminded me of the story in the Bible where Jesus and the disciples were out in their boat. A big storm came along, and Jesus slept right through it! When the disciples, who were scared to death, woke Jesus up, He calmed the storm with three simple words: “Peace, be still.”

Are you facing a storm today? Call on Jesus. He can calm your storm and give you peace.