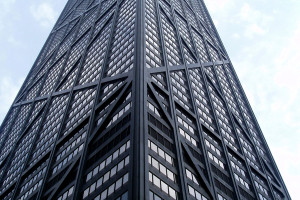 I remember as a child watching the Hancock Tower in Chicago as it was being constructed. Even though we lived sixteen miles west of the city you could still get a good view of the structure from certain vantage points around my neighborhood. It was the thrill of young boys to brag about seeing from their yard or from a tree house perch and Saturdays were spent riding our bikes to known sighting hot spots.

At the time of its construction the building was to be the tallest structure outside of New York City. Its unique design required 57 special anchors, called caissons that were sunk almost 200 feet down into the bedrock. As the foundation work progressed however, it was discovered that almost half of the anchors were defective. Progress was halted while repairs took place requiring an extra four months and an additional 11 million dollars; an added expense that sent the developer into bankruptcy. With so much at stake this important phase of the work had to be done right or the whole project would become a disaster. The foundation of any building is without question it’s most important feature. In our Christian faith grace is that footing.

Grace is the footing that the Christian faith is built upon. I trust that you’re beginning to see too that grace is the foundation of your faith. As you grow in your understanding of this personal side of grace it is my prayer that the impact of your leadership will increase. Grace is the essential substance that every leader needs.

If the church is to survive and thrive into the current millennium she must be found standing firm on the grace of God. She must be well educated in this competency of grace. She must be practicing and sharing the uniqueness of the Christian faith which at its core is based on a gift that was given to undeserving sinners.