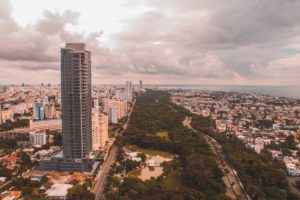 It had been an incredible adventure complete with all the ingredients of a good short-term mission trip; a good case of Montezuma’s, a unique view of the pointy end of an AK47 rifle as a nice policeman and his comrades tried to rob us, and to top it all off, a scuffle with a truck load of soldiers who had accosted one of the church kids intending to beat the coconut juice out of him. It had been a memorable journey and gave me plenty of new reasons to pray for our missionary friends.

In the middle of that experience I found myself, one particular beautiful sunny day, in a car traveling across a large city with my hosts, a national pastor and his wife. Away from the group we enjoyed a lively conversation as the salty Caribbean air wafted through the open windows. I guess all the Mango and Papaya had gone to my head because for a moment I thought it would be interesting to inquire about the challenges of hosting groups of American teenagers. It was all the permission my friends needed and the floodgates opened.

I’ve escorted numerous groups on short-term trips over the years and quite a few to this very location. I’d come to think of myself as a rather seasoned mission leader, having experienced just about every challenge you could run across as a mission trip pilot. Suddenly however, it felt as if I’d opened the door to a room I hadn’t seen before, like I was looking at my Christian culture from the outside-in rather than the inside-out. Much of what I heard was actually positive but other things were not so cheery. I wanted to shut the door but my curiosity nudged me forward. I knew I needed to hear this – for my group, for myself. That conversation was a turning point, an eye opener and I’ve forced myself to pay closer attention to these issues since.

For many years Christianity has been shaped by western influence but this is changing. By chance you already knew that Christianity and Evangelicalism in particular are shifting globally, moving south of the equator and to the east. Current statistics show that Christians in America represent about one tenth of the world Christian population. Maybe this doesn’t seem particularly odd to you but remember that at the turn of the previous century western Christianity represented nearly half of the Christian population worldwide. Still much of the missionary resources both financial and personnel come from the west. So for now, while we enjoy the flimsy sentiment that we define Christianity for the world know that the opinion makers, those that will shape Christianity in the future, are now living on distant shores.

As with so many things in life the only way you get an understanding of something is to get a good look at it from the outside. Most of what I’ve learned about American Evangelicalism has been gained from spending time with our brothers and sisters around the world. So here’s a surprising view of the way it looks from the outside and what our friends think about us.

First, American Evangelicalism isn’t required for the evangelization of the world. They actually don’t think you need to come and evangelize their people. It’s not that they mind you doing it, in fact they probably assume you are already sharing your faith on your job and in your own neighborhood. While they are aware of the fact that they probably owe their Christian heritage to some of your forefathers they don’t need you to evangelize their people because they are doing this themselves.

In many places in the world such as India and China the movement of Christianity is spreading, not because of western missionaries or even because of the work of local pastors but because lay people are telling their friends about Jesus. The pattern in India for example is often that churches are planted by lay people long before a pastor is even acquired.

Once I was asked to speak at a remote tribal church in the jungles of Asia. I was told that no western missionary had ever come to their village. Getting there involved a twenty four hour plane trip from the states, then an overnight train ride up to a town at the edge of the jungle, then a two hour car ride to a remote mission outpost followed by a motorcycle ride on a path through the bush. After an hour and a half of being slapped in the face by the tangled underbrush we rounded a bend and a small group of thatch roof huts came into view. It was obvious which hut was the church by the sound of the worship which was already in progress. After my eyes adjusted to the dark interior I noticed there was a strange absence of men.

After the service had ended a leading woman of the church initiated a conversation with me through the help of a translator. It was then I realized why the church was made up of mostly women; this woman had begun the church with the help of her peers who she had brought to Christ. She shared how they had prayed for ten years for two things; for a pastor to lead their congregation and for a foreigner to come and preach the gospel in their church. They introduced me to the young man who had recently been called as their pastor – a man they were sharing with two other congregations. Then she turned to me and said that I was the other answer to their prayer. All I could do was stand there, my hand covering my open mouth, sobbing, realizing that it was me. Once just an ordinary kid on the streets of a Chicago suburb. How did I get here? How did I get selected for this, how can I be their answered prayer? Oh, how I wanted to preach that message over – how I wanted someone else to be their answered prayer.

So while they’re not depending on you to evangelize their people they would probably welcome conversations with you about how you share the gospel message in your own contexts and among your own people. And there are numerous other needs you could fill that would assist the movement of Christianity in their communities such as medical clinics and water purification systems and computer training.

Second, you don’t actually need the donuts and coffee. After seeing so many thriving churches abroad I realize that there are many things our churches could actually get along without. You don’t really need paid staff and certainly not the costly programs. Most of Christianity through the ages existed without these things and we too could actually have church without all of that; without a paid pastor without the fee for the soccer camp and yes Christianity can even exist without the donuts and coffee.

Our foreign friends are wondering – if coffee and donuts and HD production are required to attract people to church, then to what have we really attracted them? Have we invited them to a relationship with Jesus, to a communion of saints, or just to the donuts? Have we actually called them to the same Christianity that was there in the beginning, the one where relationships were everything and, by the way, the one that was thriving as its adherents were dying by the sword and over fires?

Here’s a thought, how about a month without the doughnuts, a sort of fasting experience. Consider using the money you would normally spend on donuts and coffee and send it off to someplace where our friends are without water and food, we’re all a little too portly anyway. You’ve seen the news reports so I know you’re not that surprised, we Americans are overweight and if you traveled to many of the foreign places I’ve been it would not be that unusual to hear someone comment that you’re fat, even if you happen to think you’re not. So let’s consider a doughnut fast and spend some time reflecting about others in need of the basics and perhaps we might even drop a few in the meantime.

Third, God doesn’t need us. It’s true that this great worldwide advance of Christianity which has taken place since World War II has been carried out primarily by western Evangelicals. Yet it seems our culture is in decay and within the soup of this slump is a general moral decline. As a result much of the focus of Christianity seems to be how to get America back on track. Here’s the surprising news; Christians in other places aren’t waiting and hoping for America to once again become a Christian nation and save the world – assuming it ever was a Christian nation.

Christianity actually does rather well in places where democracy is unheard of. And for my southern brothers in Christ this may surprise you but Guns and God are not both necessary for the spread of Christianity and neither is a Christian America necessary for the salvation of the world. Surprisingly, the places around the world where Christianity seems to be growing are much more hostile to the gospel than even our own culture. Scripture tells us that he owns the cattle on a thousand hills. He made it all; he created the world, the universe and Jesus Himself said that he would build his church. He can accomplish his will by whatever means he chooses.

Still, God needs us. Not in the sense that he can’t do it without us but in the sense that he wants his followers, all of his followers, to participate in the work. We are the church and that means we are to be his hands and feet, not after we get the country back in order but before (and while) and perhaps even if we never really do get it back. Maybe the best way to think of ourselves is as Christians first and Americans second.

So for what it’s worth, consider these thoughts. Take to heart that we are part of an amazing movement of God. It’s his work and it’s incredible to think that he allows us to participate in what he’s doing.

Since that Caribbean car ride I’ve taken part in many similar conversations as I’ve spent quite a bit of time with our Christian brothers and sisters in foreign places. I’ve been welcomed into their homes and I’ve sat at their tables. I’ve spoken in their churches, eaten their unfamiliar foods and listened to their strange music. In many ways they are very different than you and I and yet there’s one great thing they share in common with us. When, because of their sin, they realized their need of a Savior it was that same pool of grace from which you and I dipped that they received what they needed; that grace which comes only from Jesus Christ. Be sure that some day when you and I are on the other side and we are standing together singing praises to the Almighty God we will be standing right alongside these brothers and sisters in Christ.

K Douglas Brown is a pastor and writer and speaks on issues facing the church and her leaders.